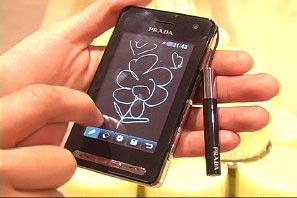 Looks like Apple is biting LG’s style again (or is it the other way around), because LG has just announced a 3G version of their semi-popular Prada touchscreen phone over in Japan. The LG Prada, up until now, has not been able to enjoy the high-speed connection offered by 3G, so this is certainly a welcome addition. Just like it will be when the 3G iPhone gets revealed next month.

Aside from the addition of a 3G radio, the revamped LG Prada phone isn’t all that revamped. You still get a 3-inch touchscreen display, a shiny black case, and a row of three buttons that lay just beneath the large display. Yes, we know that we can draw all sorts of comparisons with Cupertino’s offering, but there’s no sense in beating a dead horse.

The 3G Prada phone will be sold through NTT DoCoMo in Japan starting next month as the LG L852i. It’ll get its speed via WCDMA and HSDPA, but there is no GSM in there for roaming.