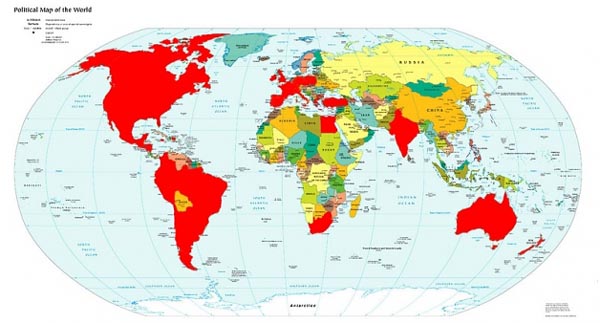 The Apple iPhone had rather humble beginnings, only getting sold through AT&T in the United States. Its influence soon began to spread and today, the iPhone covers nearly half of the world. Shown below is a map of the world wherein all the countries that have been colored red either already have the iPhone or will get the iPhone by the end of the summer.

I can’t say that the map is 100% accurate, because it has Canada doused in a sea of red, despite the fact that Rogers says that they will have the Apple iPhone “before the end of the year” and not before the end of the summer. In any case, the map is pretty close. The other note of contention is that Switzerland, Spain and Poland have not yet been confirmed at this point, but the rumors are pretty strong.

Bear in mind that this map is for official launches of Cupertino’s touchscreen phone across the globe. If we started to include all the gray market handsets, like those fluttering around in China and Russia, then we’d be getting pretty close to a red Earth.