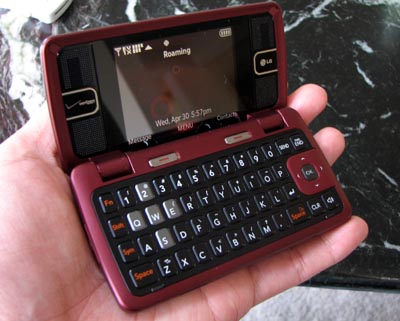 For whatever reason, the first LG enV (VX9900) from Verizon Wireless proved to be an incredibly popular cell phone. The form factor was certainly a unique one, because it allowed you to have regular voice calls on a candybar phone, but you could also flip open the handset to reveal a larger display and a full QWERTY keyboard for all your text messaging needs. The inside was attractive, but the outside was an ugly grey brick that no one would really want to show off. Verizon and LG tried to fix this with a few palette swaps, but no matter how you dress up a brick, it’s still a brick.

Although the LG Voyager can be thought as a much more advanced successor to the original, the true follow-up comes in the form of the LG enV2. This updated device is slimmer, smaller, has a better keyboard, and improves upon the original LG enV in just about every way. Well, almost every way…

By and large, the LG enV2 doesn’t really bring anything particularly new and exciting other than the fact that they’ve managed to shrink the phone down to more manageable proportions. The old phone was too thick and clunky, whereas the LG enV2 is much more streamlined in appearance. The specs are more or less the same as the original, if only mildly upgraded.

To get a better sense of what you can expect from the LG enV2 from Verizon Wireless, be sure to check out the hands-on video that I posted earlier this month. The specs aren’t exactly amazing, but they seem perfectly capable of handling what most teens and texters need these days.

LG enV2 as a Phone

In its closed position, the LG enV doesn’t really look like a cell phone at all. If I didn’t know any better, I would think that it was some sort of TV remote or maybe a remote for a PVR. The tiny display on the front cover isn’t really all that improved over its predecessor, providing just enough room for you to make voice calls and that’s about it. Yes, there is a hot key to access the music application, but you’re much better off doing any menu navigation at all through the internal display and keyboard.

The numeric keypad on the front of the LG enV2 is much improved over the first LG enV. The keys are stylish and smooth on this slim redesign. You will also notice that there is no five-way navigator on the front, opting instead for just up, down, and OK. Given the size of the external display, this is enough.

Call quality was decent, but I did experience a bit of an echo at times. Reception was great. One thing that I did notice, however, was the LG enV2 is deceptively heavy for its size. There’s quite a bit of weight to this, so you may get a little tired holding this up to your ear for extended conversations. I guess that’s where Bluetooth comes into the picture.

LG enV2 as a Messenger

This is the primary reason why someone would be interested in the LG enV2 in the first place. While the outward appearance of the closed phone has taken quantum fashion leaps in the right direction, the inside remains largely unchanged. The menu navigation has been cleaned up a little, but it’s still what you’d expect from a Verizon Wireless phone.

The QWERTY keyboard, although slightly smaller than the one on the original enV2, is still perfectly usable, complete with a row of numbers at the time. The five-way navigator is still located off to the right, and the two “space bar” buttons are still located on either side of the keyboard. One is to the left of Z and the other is to the right of period. I prefer a “center” space bar, just because that’s how it’s like on a regular keyboard. It took some getting used to having the space buttons off to the side.

Accessing the various symbols — like question marks and parentheses — is a bit of a challenge, but you probably won’t be using those all that much in text messages anyways. Sending texts are a breeze, but the mobile email and mobile web apps still need some serious work. The implementation just isn’t as smooth and intuitive as it could have been. Getting into Hotmail and Yahoo! is pretty easy, but Gmail is a bit of a challenge. 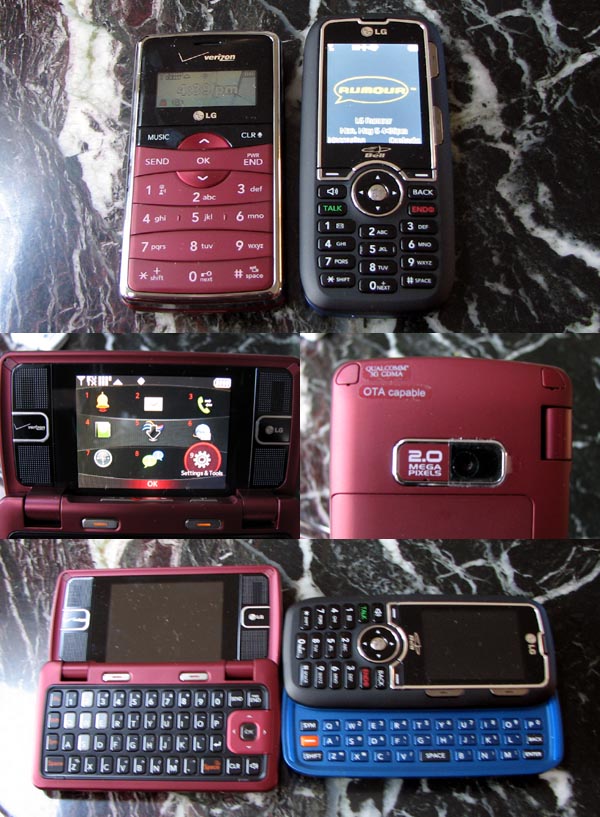 Camera, Music Player, and Other Apps

These are all secondary applications, but you still want them to be good right? The LG enV2 from Verizon Wireless comes with a 2.0 megapixel camera and it performs exactly like what you’d expect from a 2.0 megapixel camera phone. Images are pretty mediocre and it doesn’t help that there is neither autofocus nor flash to flesh out the package. Videos are recorded at a maximum 320 x 240 resolution.

The music player is just like every other integrated music player on a Verizon phone. You can sort through your tunes based on genre, artist, album, song, or playlist. The stereo speakers are nice and loud if you want to share your music too.

Other apps include the VZ Navigator, calculator, EZ tip calculator, calendar, alarm clock, stopwatch, world clock and notepad. This productivity suite is not enough to replace a proper smartphone, so don’t ditch the BlackBerry for this.

In terms of the good, the LG enV2 from Verizon Wireless is much better looking than its predecessor while still being able to maintain the same level of QWERTY utility on the inside. The smaller form factor is a definite plus and you don’t have to be ashamed to take it out of your pocket for a voice call.

In terms of the bad, the user interface is still just as clunky, the outside display is still too small, and there’s no flash for the 2.0 megapixel camera. The added weight is also a bit of a downer.

If you already own the first LG enV, there really isn’t an overly compelling reason to upgrade to the LG enV2, because it’s pretty much the same phone in a more attractive package. If you’re new to Verizon and enV-land, then this phone is worth considering if only for its great QWERTY keyboard.

The LG enV2 is available now from Verizon Wireless for $129.99 with a two-year service agreement.