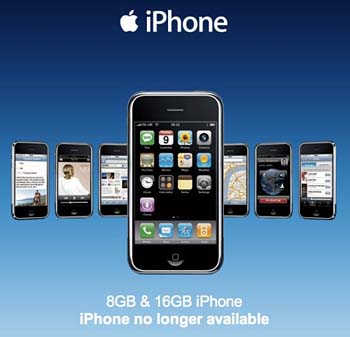 No, I’m not talking about them being sold out or running out of stock. It seems that O2 is calling it quits with selling the Apple iPhone altogether and that’s why they had those recent “price adjustments” to clear out existing units. Does this mean that O2 has no more love for Cupertino? Not exactly.

As it turns out, the reason why O2 is giving up on the current version of the Apple iPhone is because they don’t want anything to do with the 8GB and 16GB models until hey have the opportunity to start selling the upcoming 3G iPhone. As you know, the announcement of the new model is rumored for next month. It does seem strange that they are willing to give up a month’s worth of sales though.

The other alternative is that O2 could be getting the iPhone a lot sooner than next month. Nah, that’s not gonna happen.