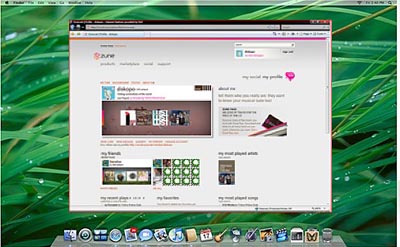 The Apple iPod can work on both Macs and Windows-based PCs. Most MP3 players will work under both operating systems. Why is it, then, that the Microsoft Zune refuses to play friendly in a Cupertino-fueled environment?

Adrian Covert of Gizmodo attended a recent Zune Media Event in Redmond and the topic came up when he started talking to the other journalists in the room. The best reason people had was that “Mac users bought Apple products more for the logo than the actual product, meaning they’d never abandon the iPod for a Zune.” But there have to be people who use Apple computers who would at least consider a non-iPod, right? Why would Microsoft leave these people out in the cold?

The first-gen Microsoft Zune had its problems, but the second-gen is a quantum leap in the right direction and it could prove to be a formidable alternative to the iPod. The iPod didn’t really get all that popular until the software started to support Windows, so why can’t the same be true with Zune? If Apple can go one way, why can’t Bill Gates go the other way?