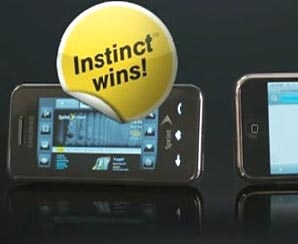 While it may seem that everyone is in love with the Apple iPhone from AT&T, Sprint wants to remind us that their full touchscreen phone is actually a better device. Sprint is set to launch a $100 million ad campaign in a couple of days that directly compares their Samsung Instinct against the Apple iPhone in a series of tests and, as you can probably imagine, they have the Instinct winning every battle.

In the first video (click here to see it), they note that the loading of web content over a high-speed EVDO connection is a heck of a lot faster than the snail’s pace of EDGE. In the second video, they show that the real GPS found inside the Samsung Instinct is far superior to the faux GPS found inside the iPhone. And they seem to throw in some raving rabbids sound clips for whatever reason.