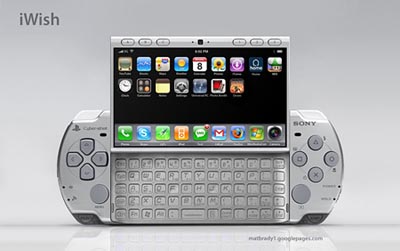 This has got to be one of the strangest mash-ups I’ve seen on a cell phone, because it seems to borrow elements from nearly every handheld known to man.

Dubbed the iWish, this cell phone concept has a basic form factor that is reminiscent of the Sony PSP, complete with the PlayStation branding on the left side, along with directional pad and set of four face buttons. I do appreciate the inclusion of dual analog sticks, however, a feature that you won’t find on the real PSP.

Going further, you’ll notice that the display can slide upwards to reveal a full QWERTY keyboard, not unlike the T-Mobile Sidekick Slide. That’s not to say that the user interface is provided by Danger, however, because it looks like it has taken on a distinctly Apple iPhone-like flavor. Curiously, you’ll notice that one of the buttons at the bottom of the touchsceen is Windows… so it has Windows Mobile too?

I’m not entirely positive if this is supposed to be just a gaming machine, a multimedia player, a bulky text-minded cell phone, or all of the above. Whatever it is, the iWish is little more than a confused fanboy’s wet dream.