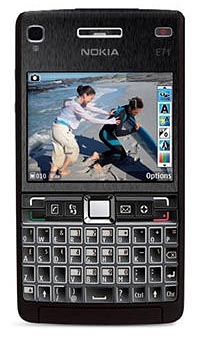 Everyone may be clamoring over the upcoming launch of the BlackBerry 9000 or maybe they’re itching for the 3G iPhone, but Nokia’s got a pretty attractive smartphone coming down the chute in less than 48 hours. Not much is known about the Nokia E71 other than the fact that it exists and that there’s a very good chance that they’ll be launching the QWERTY device in just two days.

Set for an official unveiling on May 8 (that’s Thursday), the Nokia E71 is clearly a high-end smartphone with specs to match. The full QWERTY keyboard will make mobile emails a cinch and everything will get blasted in the stratosphere at blazing speeds, thanks to both integrated 3G data and WiFi connectivity. Rounding out the specs are an autofocus camera, GPS navigation, and a thin form factor.

We can say for sure, but there’s a good chance that the Nokia E71 will be usurping the aging Nokia E62 in AT&T’s lineup. Looks like AT&T is getting all the cool toys these days.