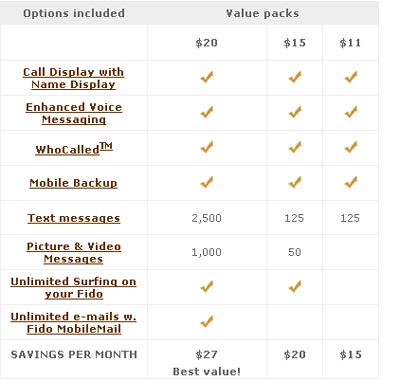 We all want call display, right? It’d also be nice to have voicemail and some text messages thrown into the mix. If you like bundling your additional services together, Fido has you covered with a new series of Value Packs.

Some of the earlier Value Packs included a certain number of instant messages, but those seem to have been removed from the VP picture altogether. Instead, you can get treated to some extra text messages or maybe some picture and video messages. The most notable change to Fido’s Value Packs, however, is the addition of something called Mobile Backup. This is meant to automatically back up your contacts and saved multimedia files.

Old Value Packs will still be grandfathered. For more information about the new $11, $15, and $20 VPs, check out the official Fido page.