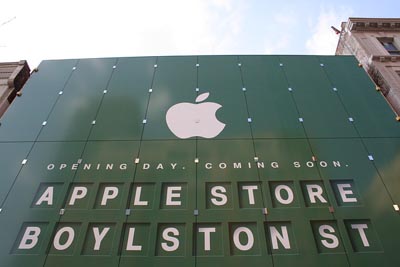 Steve Jobs is heralded as a hero in many peoples eyes and he is continually making his electronic gizmos more attractive and more compact. We started with the iPod, which later transformed into the iPod Mini, the iPod nano, and the iPod shuffle. The portable music player may be getting smaller, but Apple stores are getting bigger. And the largest in the world is about to open in Boston.

Apple is opening a new flagship store on Boylston Street in Boston later this month and it’s going to be absolutely massive. Based on square footage, it’ll be the biggest Apple Store on the globe. It looks like a four-story glass cube from the outside and Apple estimates that they’ll see as many as 2000 customers every hour.

I’m pretty sure that’s going to destroy the traffic level of the upcoming Vancouver Apple Store.