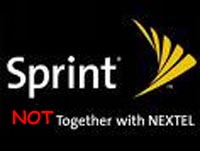 It seems like that acquisition of Nextel wasn’t such a bright idea, because Sprint is “seriously considering spinning off or selling its ailing Nextel unit.” This report comes courtesy of the Wall Street Journal, so you know that the news has some credence to it. As you may already know, Nextel’s lacklustre performance seems to be holding Sprint back and as a result, Sprint-Nextel isn’t doing quite as hot as it could be.

Nextel operates on an old iDEN network, meaning that Sprint has a whole other can of worms to manage and maintain, above and beyond their hopes to launch XOHM and maintain their own CDMA-based network. If they were to dump Nextel, they’d lose the iDEN responsibility that goes wih it. This would free up some time to get their WiMAX dream in order.

Also by getting rid of Nextel, Sprint could become much more attractive to Deutsche Telekom, potentially opening the door that much more for a T-Mobile takeover of Sprint. That’s a big acquisition.