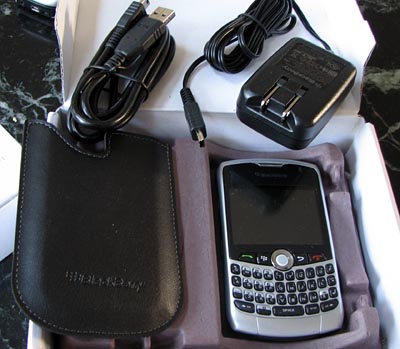 The BlackBerry Curve, in all of its different incarnations, has been available to GSM providers for quite a while now and it is only recently that Research in Motion decided to plunk a CDMA radio into the thing. Bell Mobility, one of Canada’s two biggest CDMA service providers, has snatched up the BlackBerry Curve 8330 and the smartphone has quickly become the most popular CrackBerry in Frank and Gordon’s collection. The CDMA version may be a little late to the party, but it still appears to be a very solid handheld.

When the Curve was originally released in the GSM market, many people saw it as the full QWERTY version of the already popular BlackBerry Pearl. As you may remember, the Pearl was the first BlackBerry device to ditch the side-mounted scroll wheel in favor of a trackball for menu navigation. At the same time, it was also a device that went with the SureType keyboard. The Curve maintains the trackball and replaces SureType for QWERTY, instantly making it a better device for business power users.

In the box, you will find a quick start guide, a travel charger, stereo headset, USB data cable, battery, BlackBerry Desktop Software CD, and a leather protective pocket. I found the leather case to be too snug for my liking and it wasn’t all that easy to get it out of the pouch for instant gratification. In the end, I chose to carry around the BB Curve sans protective pouch.

Regarding its dimensions, the BlackBerry Curve 8330 is very similar in stature to the Motorola Q9h, the latter of which is available through Rogers Wireless and Fido in Canada. I’d say that the Motorola is slimmer than the Curve, but not by all that much. The Curve, as you’d expect, feels very solid in your hands and I particularly liked the slightly rubberized edges on either side. This provided just enough grip.

Aside from the rubber, the rest of the Curve is primarily made of silver and black plastic, as well as a chrome piece on the back that surrounds the 2.0 megapixel camera. I like the inclusion of the camera, just for the sake of convenience, but enterprise users may want to look for a camera-less version to adhere to their company’s restriction. The overall build quality is stellar and not once did I think that the Curve felt “cheap” in my hands. Make no mistake; the Curve is for people who mean business.

With the exception of a subtle logo near the top of the home screen, there is virtually no Bell Mobility branding on this phone. A small detail, to be sure, but one that I noticed almost immediately.

Assuming that you’ll be using the BlackBerry Curve 8330 for work purposes, there’s a good chance that you’ll be spending a lot of time navigating through the various applications and typing up e-mail messages on the fly. As such, the ease of use on the QWERTY keyboard and trackball navigator are of paramount importance.

The keys are very small and they are raised from the surface of the phone by about a millimeter. Key travel is very good and there is absolutely no mistake about when you have actually hit a button. My initial instinct was to make the tips of my fingers as small as possible in order to type on this keyboard, trying to bust out emails using my fingernails. As I grew more accustomed to the device, however, I found that it was better to just use my fingers as normal, lining up the target key with the center of my fingertip. In the end, I think that I prefer the keyboard on the Motorola Q9h, simply because the keys are larger. Going even further, the best mobile phone keyboards I’ve used are on the horizontally-sliding HTC smartphones.

The trackball took some getting used to, but I ultimately found it to be very responsive. It may not provide the same level of speed as a scroll wheel, but the trackball is much more versatile, especially when navigating through webpages and the like where you need 2-D movement and not just 1-D. Confirmation is performed by clicking the trackball inwards. 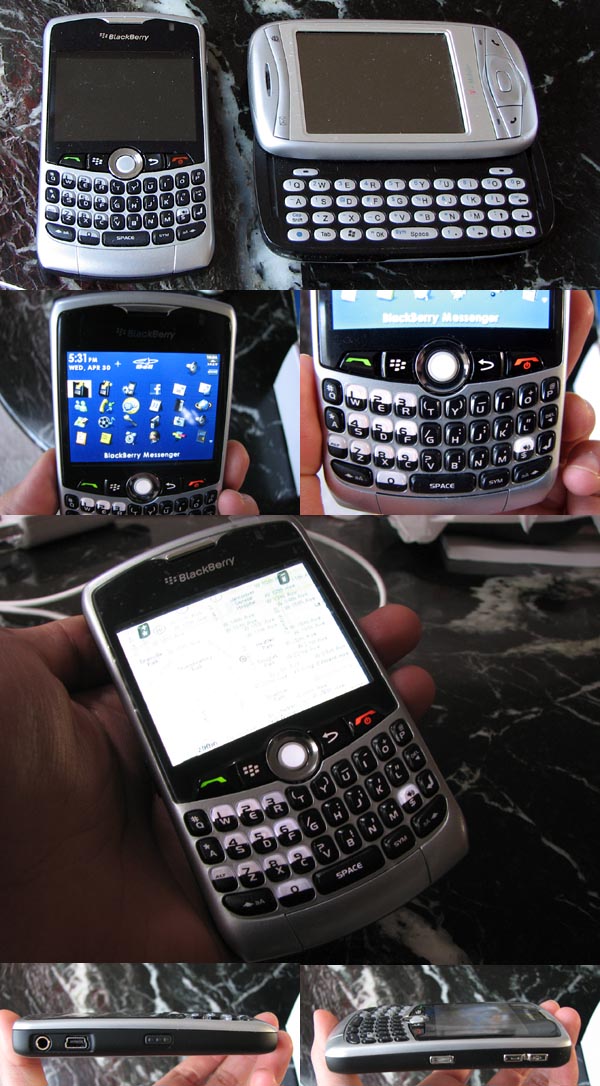 This is a BlackBerry, so it should come without saying that the Curve 8330 comes loaded with a huge productivity suite. Some of these applications do not avail themselves on the main menu until you’ve gone through the setup wizard. The wizard is used to mate the device with your corporate email account and so on. After the setup is complete, you gain access to over 30 applications.

In addition to business-minded programs like push email, HTML web browser, task manager, password keeper, and BlackBerry Messenger, the Curve 8330 also has a series of more consumer-minded apps. There are quick links to things like Facebook and Windows Live Messenger, which I found a little strange considering that this is largely a corporate handheld. I guess the suits want to superpoke their colleagues too.

At the end of the day, the BlackBerry Curve 8330 from Bell Mobility is not exactly a revolutionary device, because we’ve already had the opportunity to toy with a Curve in GSM land. Even so, I feel that it is probably the best BlackBerry available from Bell today, thanks to its good QWERTY keyboard, wealth of applications, and intuitive trackball. I like the inclusion of integrated GPS, but you have to pay each time you use it ($3.50/day or $10.00/month). This is in addition to the data costs associated with downloading maps.

If your company has its corporate account set up with Bell Mobility and they ask which BlackBerry you would like, the Curve 8330 is certainly a very solid option. For international travelers, the BlackBerry 8830 World Edition may be a better option though, because it has an unlocked SIM card slot for foreign GSM providers.

The BlackBerry Curve 8330 is available now through Bell for $249.95 with a three-year contract.