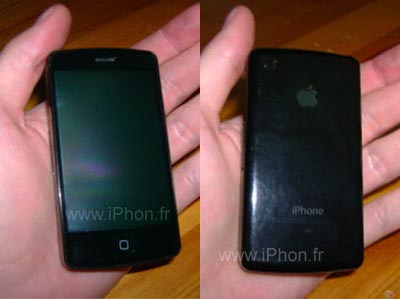 You’ll obviously have to take this report with a serious bucket of salt, but we could be looking at a leaked prototype of the upcoming 3G iPhone. This picture comes courtesy of a some random iPhone fanatic website from France and is absolutely not substantiated by any sort of legitimate source.

Even so, there are at least some elements on this handset that are in line with what we’re expecting to see in the new 3G iPhone. First of all, it boasts a jet black finish throughout for the casing, just as we’ve been hearing and we can’t say for sure, but it looks like there is a front-facing camera near the top for video calls too.

The thing that goes against earlier reports is that the “iPhone” pictured here is a little smaller than the current handset and most people said that the new one would be slightly thicker in order to accommodate GPS and 3G. Sigh, I guess we’re still left guessing.