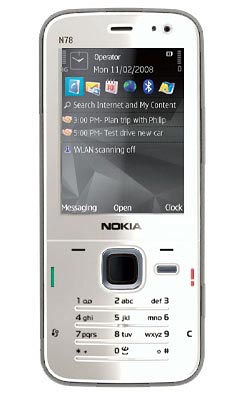 Some people don’t like the glossy black appearance of Nokia’s hottest new N-series smartphones, much preferring the clean and pure appearance of a bright white phone. For people like that, Nokia has just the thing. Spotted on the Nokia online store for Spain is a pearl white version of the Nokia N78 candybar smartphone.

There’s no saying when and whether the Pearl White Nokia N78 will ever make it out of Spain, but just knowing that it exists is moving in the right direction. As far as we can tell, the actual specs on the white Nokia N78 are identical to those found on its other-colored brethren. This means that you still get aGPS with free Nokia maps, WAN, and HSDPA. Rounding out the features are a 3.2 megapixel camera and microSD expansion.

The Nokia N78 in pearl white can be found on the Spanish Nokia website, but it is not yet available for order. When it does become available, look to pay in the neighborhood of 419 Euro for it.