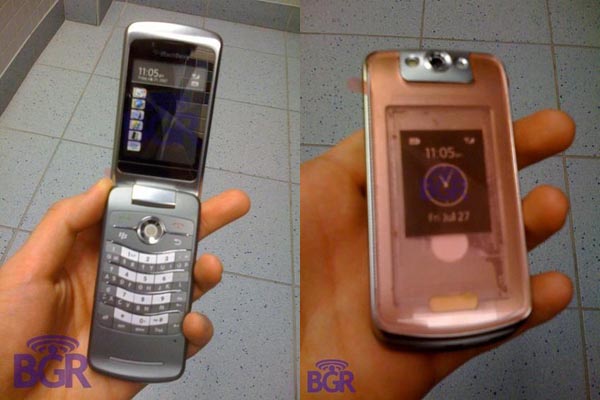 No, this is not just a rumor or a hoax. This is the real deal. What you are looking at right now is the BlackBerry Kickstart, the first clamshell cell phone ever from the people at Research in Motion. This marks a huge milestone for the company, because all BlackBerry devices up until now have taken on the standard bar-style form factor.

The overall styling of the BlackBerry Kickstart, as it has been codenamed, is definitely reminiscent of the Motorola RAZR, especially with its metallic keypad and silver bezel around the internal color display. The Kickstart gets the same SureType keyboard as the BlackBerry Pearl, along with the trackball for menu navigation. Other features include an external display and an integrated camera. The estimated street date is some time in Q3 2008.

Now tht RIM has entered into the realm of flip phones, it’s only a matter of time before they start dabbling in other form factors, like slider phones, swivel phones, and (dare I say it) iPhone-competing touchscreen phones.