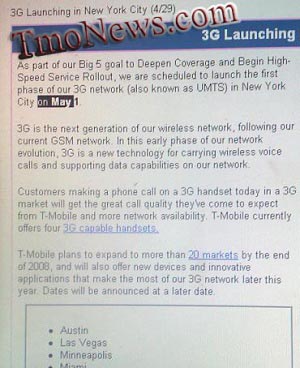 We already know that T-Mobile USA is a little late to the 3G party, so it is a little comforting to hear that they’re finally getting around to launching the 3G network tomorrow. This is according to an apparent T-Mobile internal document and it says that the initial rollout will be for New York City on May 1st.

That’s the good news. The bad news is that the internal document only makes mention of “great call quality” over the 3G network, making no mention of data. According to another internal memo dug up by the Boy Genius, the initial 3G launch is only for the yakkers in the audience. More specifically, the document says:

3G is the next generation of our wireless network, following our current GSM network. In this early phase of our network evolution, 3G is a new technology for carrying wireless voice calls and supporting existing data capabilities on our network. In future phases, this next generation network will power ‘high-speed’ (3G) products and services that connect customers in new and exciting ways. … Inform customers who are interested in high-speed data that the first phase of our 3G roll out supports voice only.