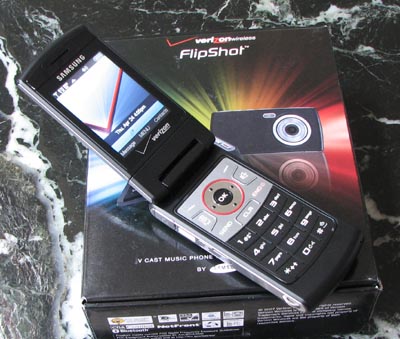 Cell phones have become virtual Swiss Army knives these days with the level of functionality that they pack into these things. Some handsets try to dabble in a little bit of everything, while others have a very particular focus above and beyond, you know, making phone calls. The Samsung FlipShot from Verizon Wireless is very clearly trying to capture the shutterbugs in the audience with its specific attention to the world of digital photography. Some may say that it’s the best camera phone available from a wireless provider in the United States today.

Naturally, the most notable feature on the Samsung FlipShot is the 3.0 megapixel camera. In fact, if you were to look only at the back of the phone, you’d swear that you were looking at a standalone digital camera. Unlike some other camera phones, the camera lens on the FlipShot is very pronounced, surrounding by a large silver bezel. This gives you the impression that it is capable of optical zoom, but it’s not. The only zoom you get is digital and only under certain circumstances. Also on the back is the flashlight.

Other key features on the Samsung FlipShot from Verizon Wireless include Bluetooth stereo support, PictBridge Digital Printing, TV-Out, Living Wallpaper, VZ Navigator capability, Speakerphone, microSD expansion slot, and an interesting display that can not only flip open like a regular clamshell, but it can also rotate and sit back down to act as a large camera viewfinder. Around the front of the phone, you’ll also find three touch-sensitive media controls.

Because you’ll be taking reasonably high resolution photos and listening to music, the microSD expansion slot is an absolute must. Unfortunately, getting to the memory card is a lot more cumbersome than it needs to be. The slot is not in the side of the phone. Instead, you have to actually remove the battery cover to find the slot for the microSD card. It’s not behind the battery itself, but this is still far more work than other multimedia phones.

The biggest reason why you would be interested in the Samsung FlipShot in the first place is for the integrated 3.0 megapixel digital camera. Given that you can swivel the internal display to make it an external display, and there are controls on the side (which become the top) of the phone when you are in full camera mode, the FlipShot mimics the user experience of a real camera very well.

The camera application automatically launches when you rotate the display into place. Alternatively, you can access the camera app through the menu or by hitting the dedicated camera button below the left soft key on the main keypad. When you are in full camera mode, the menu is activated using the soft key on the right side of the phone, and then you navigate through the menu using the volume rocker. You make selections using the shutter button.

Among the settings that you are able to adjust are color effects, white balance, brightness, ISO, metering, picture mode (including macro), flash, autofocus, self timer, quality, and resolution. There is also a camcorder mode for recording QVGA video clips.

Getting through the menu in this mode is not quite as easy as a standard five-way navigator, but it’s still pretty good. All the options are certainly a step or two above most other camera phones on the market, particularly those that are offered directly through an American service provider.

Picture quality is pretty good, especially at 3.0 megapixels, and it works best under ideal lighting conditions. Dim lighting conditions are reasonably overcome by way of the flash, but the image quality is nowhere near what a standalone camera is able to offer. For two sample images, check out this post at Beyond the Rhetoric. These pictures were taken under fluorescent light, non-macro mode, and with flash on. The detail seems fine until you look at the picture at full resolution (click on the images to see the full picture). 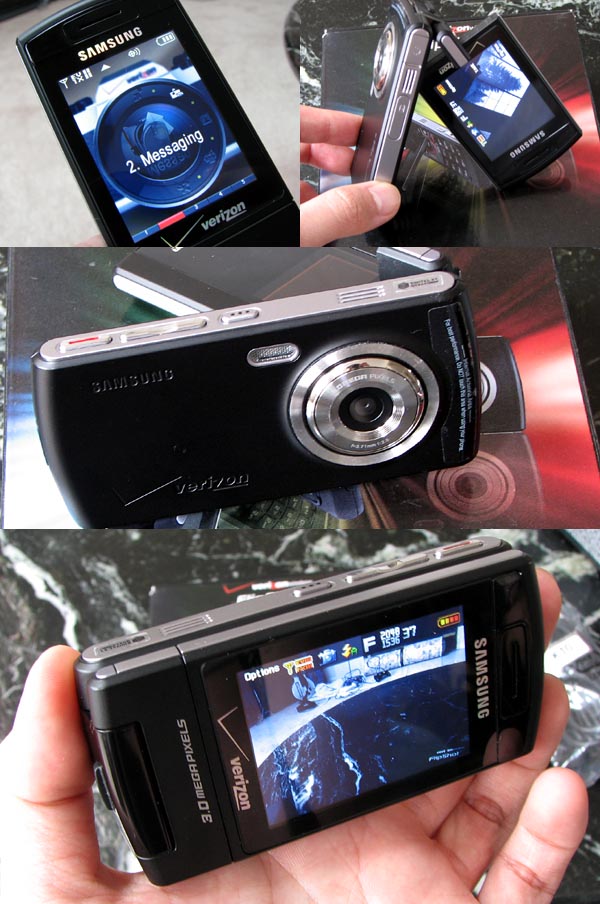 Making Calls and Other Stuff

Reception with the Samsung FlipShot was good enough for most calling situations, but I have experienced better reception with other Verizon Wireless cell phones. I was able to complete calls, but the actual call quality could get “crackly” from time to time. Menu navigation is pretty much what you would expect from a Verizon Samsung phone. If you’ve used something similar before, not very much has changed.

The keypad, although not really having distinct buttons, is pretty easy to use. There are slightly raised grooves separating the keys, so you know exactly where you are pressing. The built-in media player is the same as every other V CAST phone as well and the stereo speakers play loud and clear. The touch-sensitive media controls on the outer flap are certainly handy as well.

In terms of aesthetics and ergonomics, I’m not quite as pleased with the FlipShot. By today’s standards, it feels pretty large and clunky, especially considering that it’s not a smartphone. I understand that it’s about the same size as a compact digital camera, but it just felt a little chunky in my hands. The hinge felt strong and the overall build quality is decent.

It seems that when it comes to the best camera phones on the market, very few are actually offered directly through cellular providers in Canada and the United States. I’ve seen a few formidable entries from the Sony Ericsson Cyber-shot line, but the most camera-like of camera phones I’ve seen has to be the Samsung FlipShot from Verizon Wireless. Because you are able to able to flip the display around and navigate through a series of picture options, the FlipShot almost feels like a real camera. The 3.0 megapixel camera offers decent picture quality, but it’s still not as good as a standalone camera.

Given that the Samsung FlipShot sells for $199.99 with a two-year contract, you might be better off getting a cheaper phone and then opting for a separate camera. I have a hard time justifying the $200 asking price, when you can easily get a better phone or camera for that price.