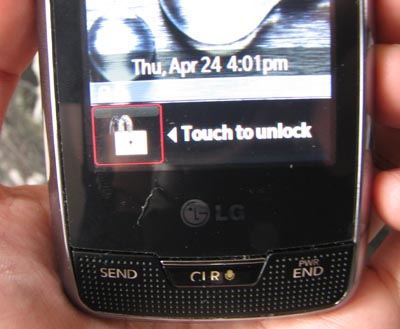 A couple years ago, we saw the launch of the LG enV and it went on to become one of the most popular handsets available through Verizon Wireless. The LG Voyager follows up on the success of the enV, removing the numeric keypad on the cover and replacing it with a large touchscreen display. In many ways, the LG Voyager can be thought of as Verizon’s answer to the iPhone. Others may say that it is Verizon’s response to the Sidekick line from T-Mobile. I say that it’s a little from column A and a little from column B.

Regarding physical size, the LG Voyager definitely thicker than the iPhone and the iPhone has a sizably larger touchscreen display. The actual proportions of this cell phone are probably much more in line with something like the T-Mobile Sidekick 3. The key difference is that instead of having the display rotate or slide open, the LG Voyager is a sideways-oriented clamshell, opening like a book. This is pretty much the same as the LG enV which preceded it.

There’s not very much that is terribly innovative here in terms of features, but it is nice to see that the Voyager has been outfitted with just about everything that the V CAST system has to offer. This includes V CAST Mobile TV (there is a retractable antenna), V CAST Music, and V CAST video. Rounding out the specs are a 2.0 megapixel camera with autofocus and video recording, microSD expansion slot with support up to 8GB, dual speakers for stereo sound, Bluetooth, VZ Navigator, Chaperone Parent, Mobile Email, HTML Web Browsing, and Get It Now.

The most notable feature on the LG Voyager has to be the large 2.81-inch external touchscreen display. Unlike other touchscreen phones, the Voyager offers something that LG calls VibeTouch Technology. In a nutshell, each time that you hit a virtual button on the touchscreen, the phone vibrates a little for tactile feedback. It works quite well, but the touchscreen sensitivity does have some issues, especially in the web browser.

The Verizon Voyager comes equipped with a full HTML web browser. This means that you are not restricted to that WAP garbage that most other consumer-level phones offer. The Internet can be enjoyed either on the external touchscreen display or on the internal non-touch display. For the latter configuration, navigation is done using the directional pad to the right of the QWERTY keyboard.

When using the external display, you are not given the multi-touch interface of the iPhone’s Safari browser. Instead, there are virtual buttons for zooming in and out, and then navigating through the page is done through the horizontal and vertical scroll bars. This made for quite a frustrating experience, because catching the scroll bars was not the easiest thing in the world. When you do activate the scroll page, a thumbnail pops up and then you can use that to navigate the page, but even then, it’s not the easiest thing in the world.

Given the nature of the touchscreen, I also found that it was difficult to click on any of the links within a web page. Only after zooming in to about 125% or 150% could I reach any reasonable level of accuracy. Furthermore, tapping on text entry fields would not immediately bring up the virtual QWERTY keyboard; it would take a few taps.

Texting with Touchscreen and QWERTY

The layout of the physical QWERTY keyboard on the inside of the LG Voyager is pretty much the same as the one found inside the LG enV. The keys are a good size and they are well spaced apart, making it easy to quickly type up emails and text messages. I like how there are dedicated keys near the top for numbers, so you don’t have to hit a shift or symbol button to access the digits.

There is a trade-off with this configuration. Because the top row is occupied by numbers, there is no room in the bottom row to have a large space bar. Instead, there are two space buttons: one located to the left of Z and the the other located to the right of the period key. I’m used to having a space bar in the center, so I found myself typing in a B or a V when I really just wanted a space. 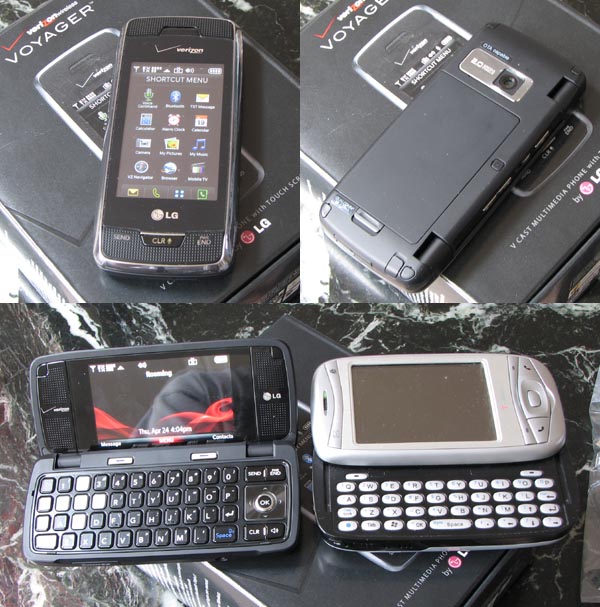 The virtual QWERTY keyboard on the external touchscreen display reminds me a little of the iPhone keyboard. Each time that you press a letter, it pops up a little to confirm that you are pressing the right one. For further confirmation, the phone vibrates just a little as well. The virtual QWERTY isn’t quite as easy to use as the physical internal keyboard, but it’s good enough.

Like several other Verizon phones by LG, the Voyager comes with a microSD expansion slot where you are able to store your pictures and music. The memory card must first be formatted in the phone, because the files must be placed within very specific folders.

I found that the music player didn’t recognize all of my audio files for whatever reason (variable bit rate, perhaps) and it’s also weird that you cannot organize the files into folders. All music folders must be placed within a single folder. Thankfully, the built-in media player lets you sort through those tunes based on genre, artist, or album. The stereo speakers are very loud too.

The digital camera is just a 2.0 megapixel unit and the image quality is far from fantastic. It helps that there is autofocus and the ability to adjust things like white balance, but don’t expect the performance to be anywhere near a standalone camera. It also stinks that there is no flash, so pictures in dim settings are completely out of the question.

In the end, I feel that the concept and hardware of the LG Voyager are pretty good. I like having the tactile feedback on the external touchscreen display and the physical QWERTY keyboard on the inside adds a fair bit of versatility. The features are quite good for a consumer level phone and Verizon has itself a decent competitor for the iPhone and the Sidekick.

Unfortunately, the implementation of some of these features leaves much to be desired. The external touchscreen display is not very accurate or responsive within the web browser, and it’s a little weird that there’s no flash for the camera. The operating system is pretty much the same as other Verizon phones, so if you hate it on other handsets, you’ll probably hate it here too.

With mobile TV, a full HTML web browser, and VZ Navigator, the LG Voyager from Verizon Wireless is a formidable option in this ever-growing market of high-end multimedia phones. At $300 with a contract, however, I’d be much more inclined to grab an iPhone instead.