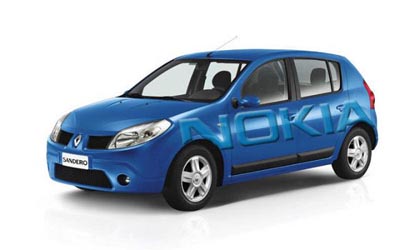 It seems that Nokia isn’t satisfied with just being the world’s largest cell phone maker, because they want a piece of the automotive pie as well. The Finnish company best known for its mobile phones has partnered up with Renault, a French carmaker, to create a vehicle that will carry Nokia branding.

They haven’t quite said exactly what the car will be and how it will look like, but we do hear that it will be a special edition model, limiting production to just 1000 units. This is meant, I guess, to create a certain air of exclusivity around the Nokia-branded car. The vehicle will be marketed in Brazil, where Nokia is very popular.

As you can probably expect, the yet unnamed Nokia vehicle will be outfitted with a number of Nokia communication gizmos, like Bluetooth connectivity and so on. Renault will also be plunking in some electronic conveniences like GPS and other technology. Look for the price to be set in the $27,000 range.