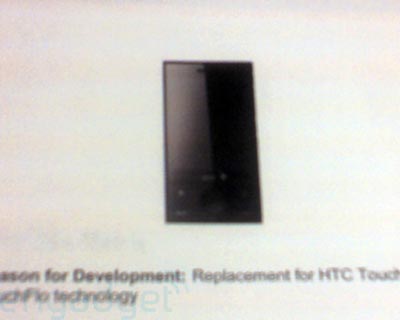 Turns out that T-Mobile isn’t the only getting ready for some killer HTC love. Recent spy shots have popped up on the Internet of two upcoming HTC devices that are destined for the shelves of Sprint. One is meant to replace the Mogul, whereas the other seems to be usurping the Touch.

Abandoning the rounder edges of the current generation, both Sprint-bound HTC devices take on much sharper corners, but they have an overall appearance that is smoother and more svelte.

The first is the HTC Raphael, which will be replacing the Mogul. It gets a slide-out QWERTY keyboard (but it’s a little different than the current keyboards), as well as a full VGA touchscreen display, Wi-Fi, 3 megapixel camera, and aGPS support. It’s set to launch in September.

The other phone, which is set to replace the HTC Touch, appears to be codenamed the HTC Diamond. It will be aesthetically similar to the HTC Raphael, except it will be sans keyboard. The rest of the specs should be the same with an expected launch coming in November. Both devices will be powered by Windows Mobile, not Android.