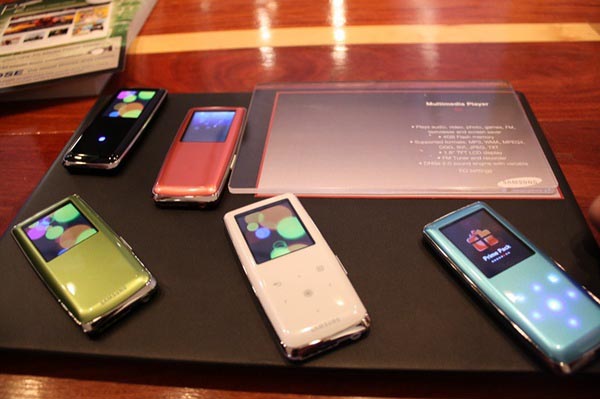 The spec list on the newly revealed Samsung YP-S3 portable MP3 player won’t wow anyone, but the charmingly disappearing touch controls are certainly attractive. Like some of the players from Sony and other companies, the touch controls on this Samsung player only light up when in use. After a certain period of idleness, the lights dim and the controls seemingly disappear.

Regarding the features on the S3, you get pretty much everything that you’ve come to expect from a Samsung MP3 player. The compact device supports audio (MP3, WMA, OGG), video (MPEG4, SVI), still pictures (JPG), and text. I’d imagine that trying to read an e-book on that tiny display would be squinty central, but if that’s what floats your boat, go for it. Other specs include an FM radio and a handful of built-in games.

Look for the 4GB Samsung YP-S3 personal media player to launch in June with your choice of five different colors. Pricing is said to be “under $130.”