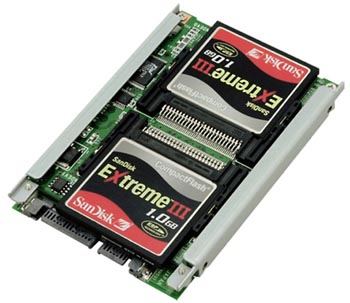 The price of owning a SATA SSD drive is still substantially higher than having a conventional hard drive of equivalent capacity, but the margin in price between the two is starting to shrink. The difference gets even smaller if you’re willing to take on a small DIY project and the kicker is that it can theoretically handle up to two terabytes of capacity.

That’s two theoretical terabytes, however, because they simply don’t make SSDs that big right now. Instead, you can look at the Century DIY SSD kit (which costs $192.57), which takes standard CF 3x cards. Toss in a couple of 32GB Compact Flash cards for $270 and add in the cost of the DIY kit, and you’re coming out with a 64GB SATA SSD for about $460.

That represents a 50% savings over what Apple is asking for with their 64GB SATA SSD drive for the MacBook Air. Now it’s just a matter of fiddling with the Century DIY kit.