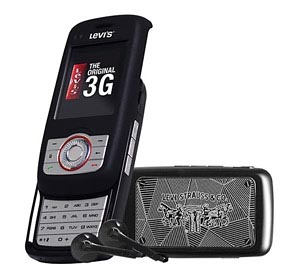 The first Levi’s cell phone was a compact candybar that really didn’t have all that much going for it. Well, it seems like the company better known for its jeans is making another attempt at the mobile phone market, this time selling a 3G-equipped slider phone through Orange of France.

The physical design isn’t quite as slim and compact as its candybar counterpart, but the backside on the slider Levi’s phone definitely has a splash of style to it. Strangely, they seem to be marketing this phone as “the original 3G”, even though it’s far from being the first 3G phone on the market.