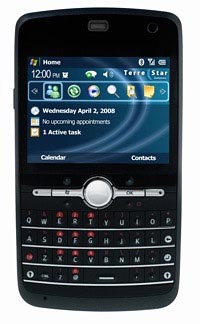 Here’s a dual mode phone of a different breed. Instead of marrying a CDMA radio with a GSM radio, Elektrobit is working on a Windows Mobile smartphone that will be able to both connect to GSM networks and operate over a satellite connection. The unnamed QWERTY-boasting phone is currently slated for a 2009 launch.

The GSM side of things also comes with HSDPA for high-speed data, but if you find yourself outside of a major metropolitan area, you can take advantage of TerreStar’s satellite network. This Windows Mobile-powered handset is clearly targeted at worldly travelers. Rounding out the specs on the Elektrobit Satellite phone are Windows Mobile 6.1, a 3 megapixel camera, WiFi, Bluetooth, GPS, and microSD expansion.

Elektrobit is saying that the Satellite phone will have a “competitive” price, but it most certainly won’t be cheap.