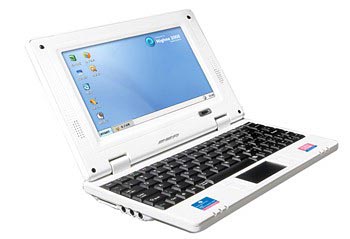 These little laptops are really starting to come out of the woodwork, because it seems like everyone and their mother is coming out with a 7-inch wonder these days. The latest company to throw its name into the subnotebook hat is 3K Computers, a firm that has proudly launched the Longitude 400.

3K Computers is better known for rebadging OEM laptops, so we’re not entirely sure exactly who is actually manufacturing the Longitude 400. What we can tell you is that the spec sheet is not quite up to snuff with the Eee PC and the main reason for this is that the Longitude 400 only comes with 1GB of internal memory. You can expand this via SD cards, but 1GB is pretty pathetic.

The rest of the specs are pretty standard with a 7-inch display, 400MHz processor (VIA?), Ethernet, Wi-Fi, and a tiny touchpad. The Linux-based operating system has been dressed up with a “GUI Based Full-Flash menu interface for ease of use.” The 3K Longitude 400 would be fine if it was cheaper, but at $399, I don’t see why you’d choose this over an Eee.

UPDATE (4/23/08): I just got a note from Dan Jacobs of 3K Computers stating that the Longitude 400 actually comes with 4GB of solid state memory, not 1GB.