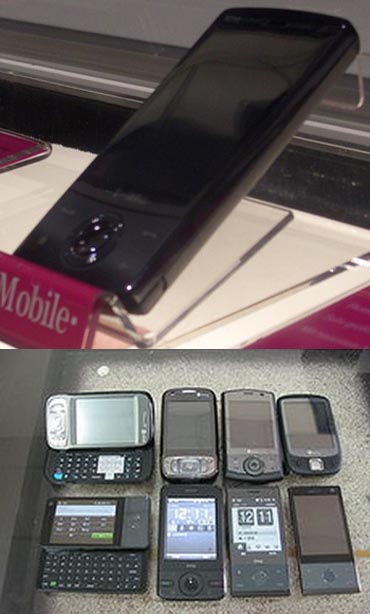 You may have seen some spy pictures of an unknown HTC smartphone over the weekend. It turns out that this is the MDA Compact IV and it’s heading over to the good people at T-Mobile. The touchscreen smartphone has not yet been formally announced by either T-Mobile or HTC, but we did manage to find pictures of a dummy model.

The MDA Compact IV will be powered by Windows Mobile 6.1 and it will come equipped with a healthy smattering of high-end features. These include an extra speedy HSDPA connection, VGA resolution display, integrated GPS, built-in WiFi, and a full 4GB of internal memory. This last bit is clearly in response to the iPhone, because HTC phones typically don’t come with that much internal storage.

The keyboard-less Windows Mobile smartphone will likely become available outside of T-Mobile with some HTC branding. There also appears to be a version with a slide-out QWERTY keyboard in the works, which you can see in the lower row of the second picture.