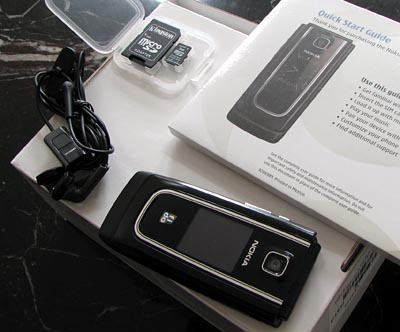 Fido doesn’t get too many exciting phones these days and more often than not, the handsets offered by the dog are just the hand-me-downs from big brother Rogers. The Nokia 6555 clamshell was recently added to the Fido lineup and while it won’t win any awards in terms of innovation, I feel that it does what it needs to do and it does it reasonably well.

As I’m sure you’ve noticed, people have come to rely on their phones for more than just voice calls these days. The Nokia 6555 doesn’t have the world’s greatest music player or the highest resolution camera, but it does have both functions. It’s the kind of phone that comes with everything that the average person would need, without going over the top to attract the more tech-savvy amongst us.

In terms of key features, you get quad-band GSM/EDGE reception, a 1.3 megapixel camera with video, WAP 2.0 mobile web browser, preloaded instant messaging application, microSD expansion slot, music player, and dual displays. The Nokia 6555 is also offered through AT&T in the United States, but the Fido version comes a little crippled. Unlike the AT&T model, the Fido version lacks PTT and 3G data. I can understand the former, but seeing how Fido is trying to push the 3G experience, it’s weird that they didn’t opt for that for this phone.

The Nokia 6555 is far from being the smallest phone on the block, but it’s compact enough for the average person. It’s not as skinny as a RAZR, but it’s not fat like a typical smartphone either. The glossy black finish with silver accents works very well, and when the phone is in its open position, the backside is completely smooth. That provides a touch of style.

Opening the phone up, you’ll find the keypad to be fairly large and easy to use. There’s a standard five-way navigator, two soft keys, and the talk and end buttons on the lower half as well. Key travel is good and it’s unlikely that you’ll accidentally press two buttons at once.

Strangely, the controls on the side — camera button and volume rocker — are located on the top half the phone. This isn’t an issue when the Nokia 6555 is in its closed position, but it can be cumbersome to adjust the volume when the phone is open.

Because the Nokia 6555 comes with an integrated music player, it is absolute necessity to make use of the microSD expansion slot if you plan on listening to more than, like, one song. Thankfully, Fido includes a 1GB memory card in the package. That’s the good news. The bad news is that you have to remove the back cover and take out the battery before you have access to the microSD slot. You can forget about hot-swapping. 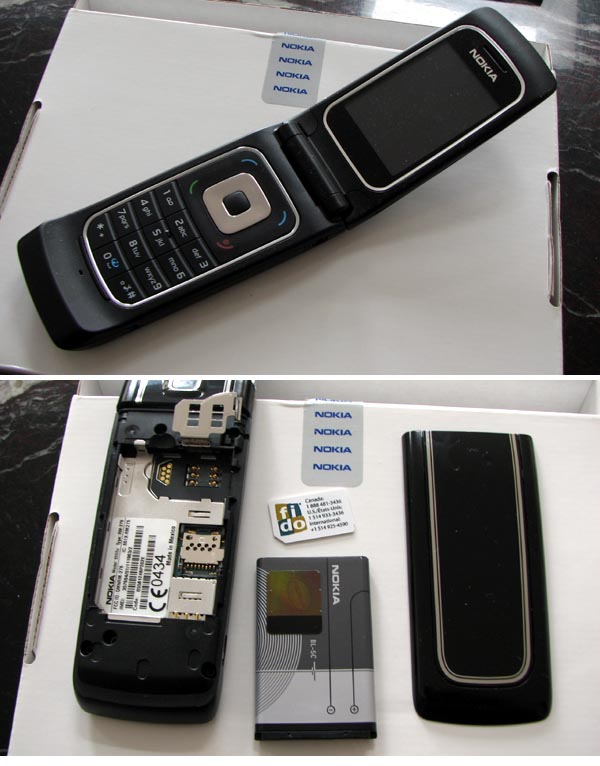 The camera is perfectly adequate for what it needs to do, but it definitely will not replace any standalone digital camera you may have. At just 1.3 megapixels, the resolution is far from being the best and the image quality, while decent, is far from stellar. Other shortcomings include the lack of autofocus and flash, so don’t even think about taking pictures under low-light conditions. I also found the camera quick-access key on the side to be annoying, because you can accidentally activate the camera while the phone is still in your pocket. Yes, the camera app loads even if the flip is closed.

Because the Nokia 6555 is a clamshell and it’s slightly longer than most other phones, holding it up to your ear for a conversation is surprisingly comfortable. The microphone is placed pretty close to your mouth and the earpiece is loud and clear. It’s almost like you’re talking on a landline phone or something.

Nokia is well known for its exceptional reception and call quality, and the 6555 does not disappoint on this front. I was able to get great reception in concrete jungles and underground parking lots; places where other phones would tell you that you’re outside the service area. Both ends of the conversation are very clear, even under slightly noisy environments. Call quality is about as good as it’s going to get.

If you’re looking for a phone that makes a fashion statement, the cheap plastic of the Nokia 6555 is going to be a major turn-off. If you’re in search of a handset with cutting edge features, the low resolution camera and less than stellar music player is going to disappoint you. If you’re a text message junkie who can’t live without QWERTY, the standard numeric keypad is going to frustrate you.

If, on the other hand, you’re looking for a reliable phone that has all of the basic (albeit dated) features that you’ve come to expect from a multimedia handset, the (boring) Nokia 6555 from Fido might be the phone for you. Menu navigation is simple, the camera is adequate, and call quality is very good. As I said at the top, the Nokia 6555 isn’t going to win any awards, but it’s still a solid performer for the average user. Just don’t expect it to wow you in any way whatsoever.

The Fido-branded Nokia 6555 clamshell is available now for $75 with a three-year contract.