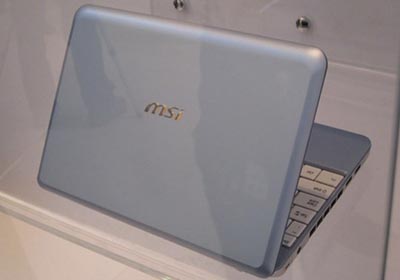 These days, every touchscreen cell phone is inevitably compared to the Apple iPhone. In like manner, every compact laptop will inevitably draw comparisons to the Asus Eee PC. Such is the case with the MSI Wind, a subnotebook that’s a little larger than the current 7-inch Eee.

MSI is saying that there will be two versions of the Wind subnotebook available: an 8.9-inch and a 10-inch, both of which come with a 1024×600 pixel resolution display. Other specs on the 2.2-pound laptop include Windows XP, 1GB of RAM, and an 80GB hard drive. That’s right; no SSD for MSI.

The kicker is that MSI is promising a whopping seven hours of battery life on the Wind. That’s crazy talk! In any case, the tentative European launch date is June with prices ranging from 299 to 699 Euro, depending on configuration. No word on an American launch.