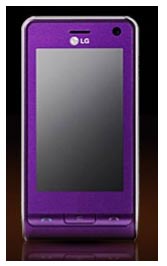 Looking for a way to flash a little more of that personality? It has now been announced by Orange of the UK that they will be carrying a version of the LG Viewty in purple. That’s right, purple has orange Orange has purple. The only way things could get more confusing would be if Orange launched a purple Apple.

The exclusive purple edition of the LG Viewty has much the same features as its non-grape counterparts. This means that it gets a 5 megapixel camera, xenon flash, and a full faced touchscreen to go with its HSDPA connectivity and iPhone-challenging appearance. It will only be a matter of time before the Viewty gets launched in other colors as well, even from providers not named after a fruit.

The LG Viewty in purple is available for free from Orange UK, provided that you’re willing to sign up for a new, qualifying wireless plan. More info here.