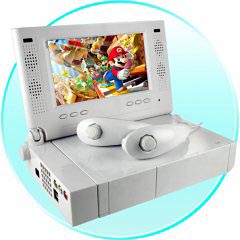 With Super Smash Bros. Brawl creating the wave that it has and with Mario Kart Wii just around the corner, countless people are itching to get their hands on Nintendo’s motion-sensing video game machine. The trouble with the Wii is that you are typically restricted to the living room, because you need a TV and some space to move. This portable screen removes that restriction.

The curious people at Chinavision have come up with a tiny 7-inch Nintendo Wii LCD monitor, effectively letting you take the Wii with you on the road. All you need is power and, um, a little space to wave your arms around. That said, after playing with the Wii on a big-screen TV, you may have some trouble adjusting to such a small display.

When the screen is not in use, it can be folded down like a laptop computer. When not Wii-ing your brains out, the Chinavision monitor can also be hooked up DVD players, USB peripherals, and other multimedia devices. Power can come from either the regular Wii cable or through the provided car charger adapter.

The Chinavision Nintendo Wii LCD Monitor sells for $101.45 each.