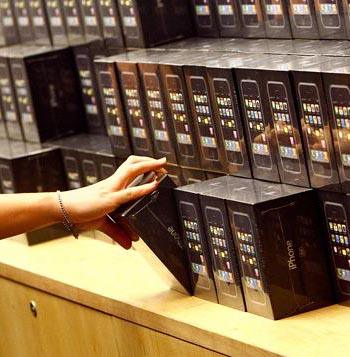 Take this report with a serious grain of salt, because it involves the 3G iPhone and we all know how rumors about that device go. Although Cupertino hasn’t confirmed things one way or another, it’s well within the realm of possibility that the 3G iPhone will be announced in June. And now we’re hearing that it’s going to “radically different” than the existing model.

You may have heard that European sales of the iPhone have been lacklustre at best and many Europeans are waiting for the 3G model. After all, high-speed 3G data is not a luxury in the UK, France, and other European countries; it’s an expected way of life. As such, Apple could be working hard to push out the 3G iPhone sooner rather than later.

The article in the UK Times goes on to say that the new iPhone will look “radically different” and it may even come with a full QWERTY keyboard. Yes, a physical keyboard. They didn’t go into any further detail than that, but the Digg’s Kevin Rose is predicting that Apple will have several models of the iPhone. You know, like the iPhone nano, iPhone classic, and… iPhone shuffle?