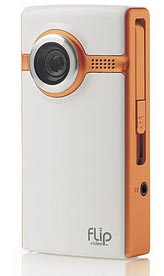 The Flip camcorder isn’t exactly a new product, but it has suddenly increased in popularity after being featured on such blogs as TastyBlogSnack and John Chow dot Com. People love its relative affordability and the reasonable web-ready video quality. As it turns out, however, the Flip manufacturers may have been thieves.

Advanced Video Technologies (AVT) is alleging that the company behind the Flip camcorder stole their patented Full Duplex Single Chip Video Codec compression software. (Try saying that three times fast.) It is through this software that you are able to store so much video on such a paltry amount of embedded memory.

AVT is not looking to block sales of the Flip camcorder, but they do want to get paid for that patent infringement. After all, the Flip has captured a full 13% market share.