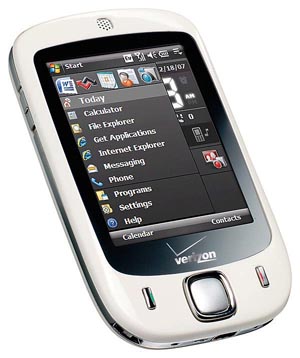 I’m not really sure if I should believe this, but Verizon Wireless shot out a press release earlier today announcing the availability of the Verizon XV6900, which most of us know better as the HTC Touch. The keypad-less cell phone has been available through other carriers for a little while now, but it seems that the Verizon version has an extra trick up its sleeve.

According to the press release, the Verizon XV6900 comes equipped with an autofocus camera, a feature that is lacking on every other HTC Touch model released thus far. Other versions have the 2-megapixel camera, sure, but this appears to the first to boast auto-focus. This will certainly be welcome by the spontaneous shutterbugs in the audience.

Rounding out the specs are 256MB of flash storage, 128MB RAM, 1880mAh extended battery, high-speed EVDO for data, and that glorious touchscreen display. Sadly, the price for the Verizon XV6900 is a little higher than other HTC Touch models, getting tagged at $350 with a rebate and a two-year contract. You can knock off another $100 if you agree to a qualifying voice and data plan.