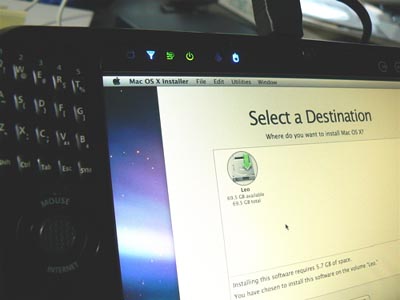 It’s not quite the same thing as getting a true-to-life Apple Tablet PC, but this is probably as close as you’re going to get any time soon. Kevin at jkOnTheRun has decided to run a little experiment wherein he will load Mac OS X onto his UMPC. More specifically, he has installed the Apple operating system onto his Samsung Q1 Ultra Premium.

He’s still ironing out some of those initial jitters, but it seems like the install has gone through without too much trouble. He was also able to get the touchscreen to work reasonably well, scribbling down a note using his stylus. The implementation isn’t perfect, but at least it works. That’s more than what people can say about Mac OS X on a Sony UX-series UMPC.

Kevin suspects that he will “never get everything working” and he’s had some “issues upon rebooting.” Thankfully, he was able to get online using EV-DO. Stay tuned to see what other issues (and successes) Kevin experiences in his mobile Mac journey.