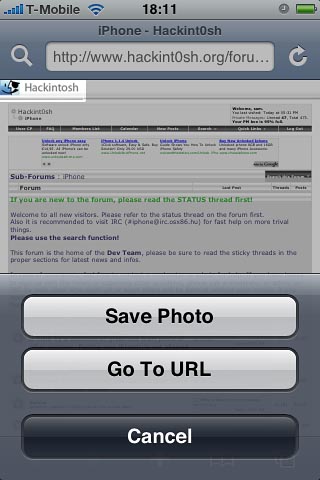 Surfing the Internet on your Jesus phone is a reasonably enjoyable experience, but there are just certain features that have been missing from Apple’s take on the mobile web. The most recent version of the iPhone firmware — 1.2.0 beta — comes with the ability to save pictures directly from Safari and into the Photo Album.

This functionality has not yet been confirmed, but it looks well within the realm of possibility given this screenshot. The folks at Gizmodo gave the beta firmware a whirl and they said that it works. All you have to do is hold your finger down on an image and a popup dialog will appear. You can probably think of all sorts of ways to use the saved images.

Did your friend post some incriminating evidence on Facebook? Maybe it’s time you save that photo before he decides to take it down.