Samsung has just announced a trio of new cell phones apparently for the Dutch telecom market and the styling is right in line with what we’ve come to expect from the Sammy team.

On the far left is the Samsung i900. It appears to be similar to the North American model, but they’ve swapped out the Samsung OS for Windows Mobile 6.1. Other specs include tri-band GSM/GPRS, UMTS, Wi-Fi, USB 2.0, Bluetooth 2.0, and a five-megapixel camera. The metal casing is pretty elegant too.

In the middle is the Samsung U800, a candybar variant of the U900 Soul slider. You get a brushed metal body, a 3.2 megapixel camera, quad-band GSM/GPRS/UMTS, Bluetooth 2.0, USB 2.0, FM radio and a non-touchscreen display.

On the right is the Samsung L870. Running on Symbian S60 OS, this smartphone boasts quad-band GSM/GPRS/UMTS radios, a 3 megapixel camera, Bluetooth 2.0, USB 2.0, and FM radio. This looks like it’s targeted the same market as the Nokia N-series. Don’t you think it looks like the N95? 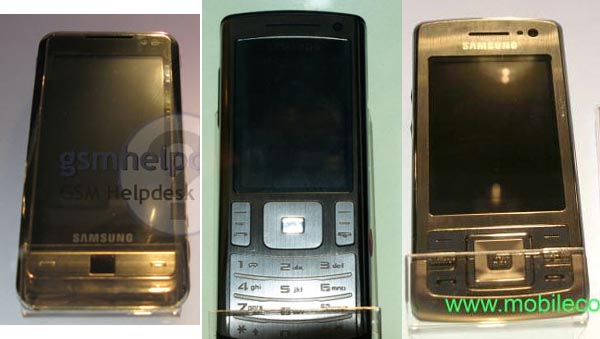