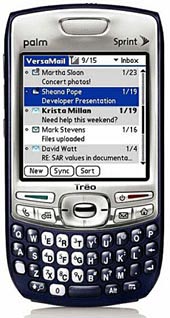 If you’ve been meaning to get your hands on the Palm Treo 755p from the good people at Sprint, you better do it soon. There’s word going around that Sprint is getting rid of the QWERTY-packing Palm smartphone, despite the fact that Palm just sent out a massive update for the handset.

Currently, the Sprint website is totally lacking in the Palm 755p department, having already pulled the handset from the online store. We’re not sure when (and if) they’ll start yanking the phone out of the clutches of their physical stores, but when a phone leaves the online world, it’s only a matter of time before it leaves the offline world too.

The rationale could be that sales of the Palm Centro are cannibalizing the sales of the Treo 755p anyways. Both phones are meant to appeal to both the consumer and business user.