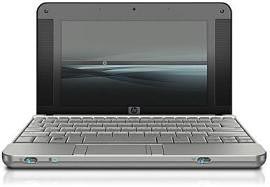 You’ve probably heard a little about the HP Mini-Note these past few days and how the subnotebook would provide some healthy competition for the Asus Eee PC. The current unit shipping to retailers gets its processing from the Via C7-M, the same processor found in countless other UMPCs. As it turns out, HP isn’t quite satisfied.

Don’t get me wrong. The Via C7-M looks a perfectly capable processor for the HP Mini-Note, but the HP people are already looking at other options. More specifically, HP product marketing manager Robert Baker says that the company is entertaining an “interim refresh” in six months that could involve the Intel Atom or the Via Isaiah chip. The Isaiah fits in the same socket as the C7-M, but “if the Atom is the right processor, that’s what we’ll go with.”

This comes off as a little strange, because implementing the Atom would require a little more than a minor re-arrangement. Moreover, the Atom was designed largerly for mobile optimized operating systems rather than small laptops. Yes, the line is blurring between the two, but it still exists. Maybe they’ll make one Isaiah-powered Mini-Note and then a MID with Atom too.