Worms. It’s a video game franchise that I have been enjoying for more than a decade and I’m glad that they have left the formula largely untouched. If you’re ready to re-enter the world of rocket-launching invertebrates, I’ve got some great news for you. THQ Wireless is planning to port Worms 2008: A Space Oddity to mobile phones.

Although the actual gameplay is essentially the same as it has always been, Worms 2008 for cell phones comes with a few nice additions that shake up the series a little. You get four all-new mini-games, as well as an enhanced single player campaign mode. Yes, there are new “loopy weapons” as well and the landscape view mode makes the turn-based battles a little easier to see.

Based on these screenshots, the graphics are quite nice and you’ll have no problem discerning between the exploding mortar, the blowtorch, and the Street Fighter-inspired uppercut. The mobile version of Worms 2008 is set to launch in June 2008. 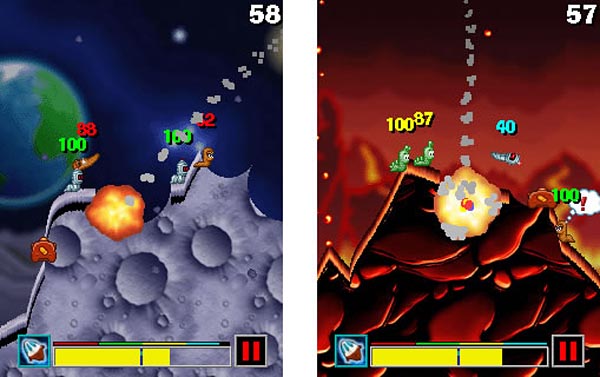