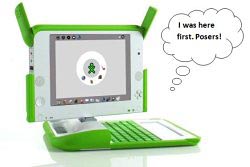 Well, I don’t know if “promise” is the right word, but Nicholas Negroponte is responding to the recent influx of affordable minilaptops by saying that they are striving toward a $50 laptop, which he says is the ultimate goal of the OLPC project. Really? Fifty bucks? I thought you were having a hard enough time reaching the original $100 target.

With the emergence of small notebooks like the Intel Classmate and the HP Mini-Note, it’s obvious that there is a huge market for these tiny computers. The OLPC XO laptop is far from being a powerhouse, but it had the vision for affordability from the get-go. In responding to the second-gen Classmate from Intel, Negroponte says that they’ve made “many steps forward with the CMPC2, but the display is still really very weak. 480 lines does not work.”

Just as the Asus Eee PC is now available with Windows XP, the OLPC project is working toward that too. The difference is that “OLPC worldwide is working on a dual-boot system” that deploys both Windows and the Sugar OS.