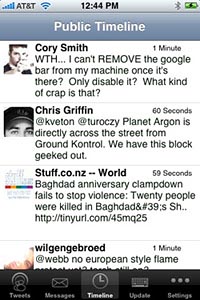 Although you could check up on your buddies and update your status through the web interface, it’s probably easier to just make use of the newly released native third-party Twitter client for the Apple iPhone. I recently jumped into the world of Twitter (follow me here) and I can see the value of it as a great networking tool.

You’ve been able to use Twitter on the road from the beginning, but a native application would streamline the process significantly. Because it is a locally installed Twitter client, you no longer have to mess with web-based applications. Appropriately dubbed MobileTwitter, this client by Nicholas Pike can be launched on Installer.app through the STE application repository.

As I’m sure you can figure, your iPhone has to be completely jailbroken and open to third-party applications before you can use MobileTwitter. And don’t worry. Nicholas Pike says that he will be bringing more updates to the app in the future too.