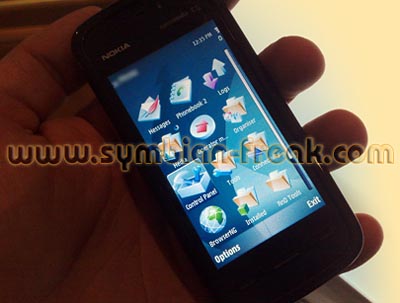 I know, I know. It’s probably a pain in the derriere for any Apple haters out there, but there’s no denying that the Nokia Tube is going after the same market as the LG Prada and, yes, the Apple iPhone. In fact, many circles are saying that this is the next “iPhone killer”, especially since it comes with the backing and branding of the world’s largest cell phone manufacturer.

The Nokia Touch is a touch-only device, lacking any sort of physical keyboard (just like a certain phone from Cupertino). It is the first handset from Nokia to boast the new S60 Touch operating system and based on its name, I have a feeling that they’re going to push the multimedia side of things with the Tube. The touchscreen, which measures between 3.0 and 3.5-inches across the diagonal, provides a “revolutionary variety” of haptic tactile feedback, but it’s not multitouch-enabled. You can use both your finger and a stylus.

Other features include a high-resolution camera with autofocus (5MP?), quad-band GSM/GPRS/EDGE, Bluetooth, high-speed data via UMTS/HSDPA, integrated Wi-Fi, and built-in GPS with geotagging support. No word on pricing, but the tentative launch date is some time in the second half of this year.