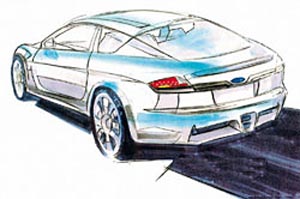 You may have heard about the partnership between Toyota and Subaru to create a lightweight coupe with all-wheel-drive. Although neither company has officially confirmed this project, it has more or less been confirmed by just about everyone else. In any case, we haven’t really seen what this car will look like. That is, until now.

A sketch of the Subaru-Toyota AWD coupe has surfaced on the Internet and it points toward the approval of the final design, which should be coming out some time in July. Both Subaru and Toyota will be getting their own versions of the car, but they are working together on the development.

The unnamed vehicle could point toward Toyota’s return to the sports coupe market, a market that they abandoned when they stopped producing the Supra, Celica, and even the MR-S. We hear that the Subaru-Toyota coupe will be powered by Subaru’s 2.0L boxer engine for 175hp and the default configuration will be RWD. That said, they are also considering an AWD version (nodding to the Celica GT4 and taking advantage of Subaru’s expertise), as well as a 2.5L turbocharged engine.

Take this rumor with a little hesitation, but they say that they’re looking at a 2010 launch in Japan, the UK, and North America.