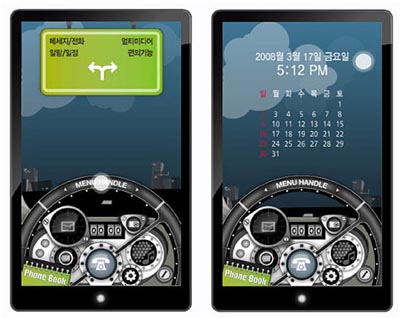 LG has made a valiant effort into the world of touchscreen cell phones, trying to entice us with items like the LG Voyager and LG Prada, but they just haven’t caught on quite as well as the Korean company had hoped. It’s obvious enough to the folks at LG that the touchscreen user interface needs an overhaul and they are looking to public submissions for help. And yes, they’ll pay you for it.

Yes, they are still looking at their internal designers for some help as well, but if an external source — like you — comes up with a great user interface for their next generation of touchscreen phones, LG will award you with 14 million Korean Won. That works out to a touch over $14,000 in American dollars. A pretty decent prize for “just” coming up with a usable and attractive UI.

You don’t have to create the UI itself either, because they’re just looking for a theme that’ll work. Shown here is one of the early submissions and I guess it’s supposed to mimic the interior of a car. I personally think it’s too cluttered.