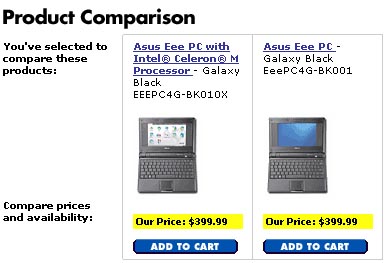 Remember yesterday when we discovered that the Windows-powered Asus Eee PC would cost the same as its Linux-powered counterpart? Well, while the two units may bear the same outward appearance and come attached with the same price tag, the XP-powered Eee PC actually has a few disadvantages compared to its Linux-powered counterpart. There is a Microsoft tax to be paid, it seems.

The differences between the two fly under the radar unless you take a very close look at the specs and compare them side by side. Yes, they both get the same Celeron processor and 7-inch display, but it turns out that the Windows version is missing the memory card slot. This is assuming that the Best Buy website is accurate, of course, but that’s a pretty big downer considering that the Eee only has 4GB of internal storage!

The other notable difference is that the Eee PC powered by Windows XP gets a one year warranty, whereas the Linux version gets two years. Strangely, the spec sheet also says that the Windows version does not support MPEGs. That can’t be right, can it?