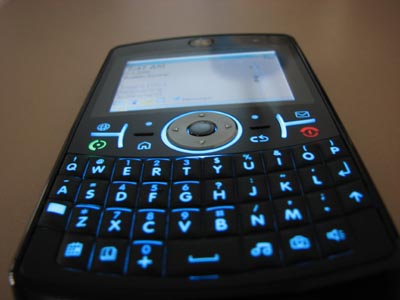 To accompany their foray into the world of Windows Mobile, Fido launched two very similar looking Windows Mobile smartphones. On the one hand, you have the Samsung JACK, which some of you may know better as the BlackJack II. On the other hand, you have the Motorola Q9h. Both of these handsets represent their respective second generations, upgrading over the first Samsung BlackJack and the first Motorola Q.

As I mentioned a short while ago, I’ve had the opportunity to take the Fido-branded Motorola Q9h out for a test drive this past week. I haven’t used a live unit of the Samsung JACK, but based on my experience with a dummy JACK and the real Q9h, I have to say that the keyboard on the Motorola is significantly better. Is this a formidable entry into smartphones for Fido? Read on and find out.

If you’re accustomed to the relative proportions of a BlackBery device, then you’ll feel right at home with the Motorola Q9h. If you’re not a BlackBerry user, however, you’ll find that the Motorola is definitely on the wider side of things. It still fits in my pocket, but that extra width just makes it a little stranger to hold, especially for voice calls. Motorola has countered this extra width by making the Q9h remarkably slim… sort of like the RAZR and SLVR.

The QVGA display is reasonably crisp, but I wouldn’t recommend watching too many videos on this thing. Yes, it has Windows Media Player so it can handle music and movies, but this is largely a business-oriented device. The QWERTY keyboard takes up about half of the front face and then above this are a five-way navigator, as well as several smooth keys that are flush with the surface of the phone. They’re not touch-sensitive; they still have the “click” of a physical button.

I personally found the location of the backspace button, located beneath the right soft key, to be a little odd, especially since I’m used to my T-Mobile MDA. On that phone, the backspace is where it would be on a computer keyboard. One thing that I did like, however, were the rocker keys on the right side of the phone. You can use these to quickly scroll through emails and webpages. On a side note, surfing the HTML web is not fun on such a small screen.

Wireless email has to be the biggest feature that Fido is trying to push with the Q9h and the JACK. The email, however, is not for enterprise users. Instead, it’s personal email via a series of popular online services. Getting synchronized with Hotmail was a snap, but I ran into some initial difficulty with GMail.

As it turned out, my issues with Gmail were just a result of not reading the instructions (d’oh). I had to go into my Gmail account to activate POP mail, and then the messages got beamed over to the handset without a hitch. The thing is that this is not push email; it’s simulated push. You can set how often you want the phone to look for new messages, but the more often it checks, the worse your battery life becomes. 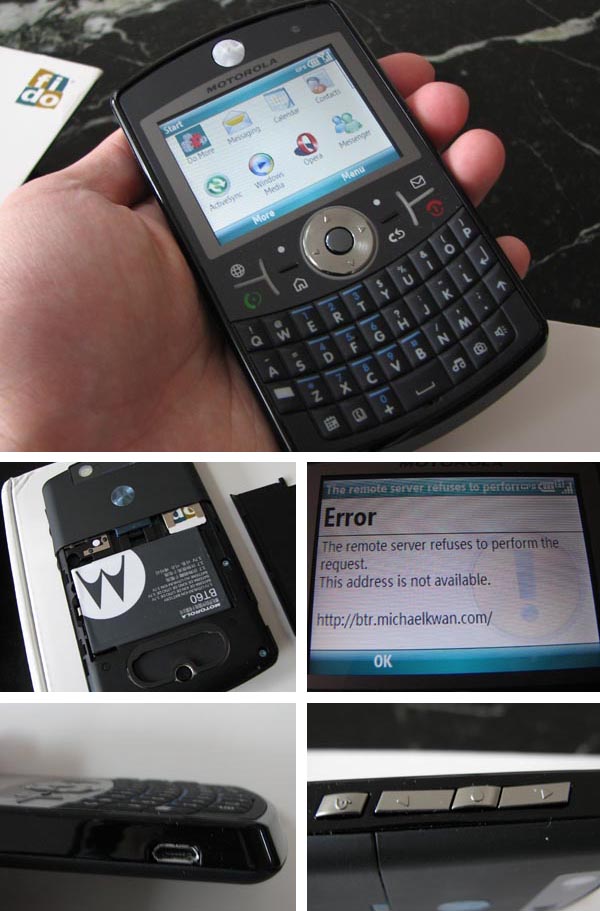 Speaking of battery life, it’s not the best. Under light to moderate use — including email and the occasional mobile website — I found myself reaching for the charger at about the 24 hour mark.

For some reason, the web browser stopped working for me, but this could be because the Fido people deactivated my surfing capabilities in the latter part of my review period. In any case, when I stopped web surfing, I could get the Q9h to last two to three days between charges.

The rest of the phone is pretty much what you would expect from a Windows Mobile smartphone. The home screen may look a little different than the standard Windows Mobile 6 home screen and that’s because Fido developed their own skin. You can switch to the standard view if you prefer, but the layout of the Fido theme worked just fine for me. I liked how the little icons near the bottom, which represent recently/frequently used applications, are actually labeled under the Fido theme.

Beyond the email, mobile web surfing (Opera), instant messenger, and so forth, the Motorola Q9h is also equipped with standard things like Calendar, ActiveSync (naturally), Tasks, Calculator, and a quick link to “Do More”. It is from this last part that you download the TeleNav GPS functionality.

The Fido Windows Mobile unlimited email service seems to work very well and although it’s not true push email, it can update often enough for most casual users. I could go at length complaining about the price of mobile data, but you’ve surely heard that all before.

Perhaps my biggest gripe with the Motorola Q9h is that the keyboard feels too cramped. I’ve become too accustomed to the horizontally-sliding QWERTY keyboards of HTC PocketPC phones, because this affords more spacing between the keys. The keyboard on the Q9h is certainly better than the JACK, though, and if you’re used to something like the BlackBerry Curve, the Q9h will feel pretty similar. I just wish the battery life was better.

The Motorola Q9h is available now from Fido (and Rogers Wireless) for $200 with a qualifying three-year contract. You’ll need to sign up for one of the Windows Mobile email options to get that price (starting at $15/month for unlimited email + 2MB).