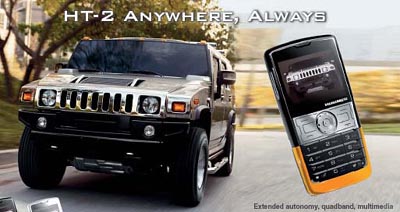 The first Hummer mobile phone — the HT1 — was very much like the huge honking H1 truck that it was based on. As such, the smaller followup — the HT2 — takes a page out of the Hummer H2, doing the same thing as its bigger brother, but in a smaller package.

The Hummer HT2 mobile phone was designed and will be distributed by the people at ModeLabs Group and it will be launched as part of the “exclusive licensing contract” that the company has with Hummer, the big honking division of General Motors Corporation. As you can tell, they built the HT2 to be a little rugged, but it’s probably not terribly practical. Then again, the dual-SIM configuration might come in handy.

The rest of the specs include a 256k color display, 2 megapixel camera, media player, microSD expansion, Bluetooth, email client, and up to 500 hours of standby. The initial launch is being planned for Russia this quarter and then they’ll start shipping to Latin America near the end of Q2.