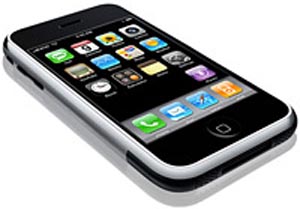 Maybe it’s the price that has been holding you back from buying an Apple iPhone. If that’s the case and you happen to live in Germany, you could effectively score quite an awesome deal, slashing the price on the iPhone to just 99 Euro. That works out to about $155, which is a sharp contrast to the standard $399 asking price that you’ll find in AT&T stores in the United States.

T-Mobile Germany is placing the iPhone on sale, but as with most of these kinds of deals, there is a catch. In order to buy a 99 Euro iPhone, you’ll need to sign up for one of their beefiest wireless plans. The Complete XL goes for 89 Euro per month, which is only 10 Euro less than how much you’d pay for the iPhone. With that plan, you get a 1000 minutes, 300 text messages, and unlimited EDGE data. You also get free access to T-Mobile hotspots. I don’t know about you, but I’m not willing to spend $150 a month on cell phone service.

Dialing it down, you can also look into their smaller plans. Opting into the L, M, and S plans will send the price of the iPhone to 149, 199, and 249 Euro, respectively. The S plan limits you to 500 MB of EDGE data.