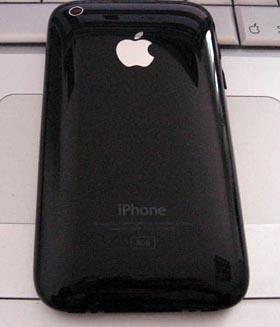 Everyone is getting pretty anxious about the prospects of a 3G-touting Apple iPhone, especially since most of us have no confirmed idea of what the next-generation cell phone is going to look like. As such, we should probably take this photo with a grain of salt. Pictured here is what appears to be the next iPhone, except the back is a fingerprint-loving glossy black, instead of the metallic back that is found on the current iPhone.

It’s hard to believe this one for certain, because the glossy black plastic is more of a Samsung thing to do than it is an Apple thing to do. Moreover, it’s perfectly possible that this is little more than some sort of aftermarket modification for the existing iPhone. Alternatively, it could just be a clever PhotoShop job. Then again, it could be real.

Part of the reason why Apple may opt for a plastic back is that a metal back may interfere with all the wireless radios getting shoved into the new iPhone, like quad-band GSM, tri-band WCDMA, 802.11n Wi-Fi, Bluetooth, and so on.