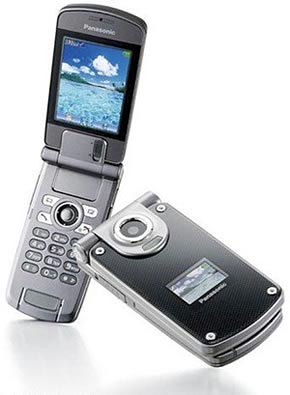 We already know that AT&T plans on launching their MediaFLO-powered mobile television service soon and now word has gotten out that Panasonic will be offering cell phones for that service that come with plasma video displays. Yes, you read that correctly. You are essentially get a plasma TV in the palm of your hand.

They’re probably not quite as good as the huge plasma TV you have in your living room, but the Panasonic cell phones will use “new low-voltage plasma technology” that is lightweight, thin, and incredibly compact. The goal is to rival OLED displays for brightness, contrast, and thinness. The kicker is that these mini plasma TVs can be manufactured for less money than their OLED counterparts.

Many of our new phones will have vibrant color plasma screens that can run on just 1.5 volts and won’t require any additional wiring or special power supplies. We’ll be able to put plasma in cell phones, business phones, consumer phones, corded phones, cordless phones, and even door intercom monitors and fax machines. We will revolutionize the consumer electronics business, as Panasonic has done many times before.

April fools joke by lamers at AbleComm 2 days late, read their original release and retraction below.

We are advised by AbleComm, Inc. that journalists and other readers should disregard the news release, Panasonic To Put Plasma Video Displays in Cell Phones, issued earlier today over PR Newswire, as the entire news release is completely false.

The service will provide full-length television content and sporting events from CBS, Comedy Central, ESPN, FOX, MTV, NBC and Nickelodeon. It will be available in May.

Panasonic Communications and Networking Division Vice President Hiroshi Mitsukoshi told of a leadership shift in business phone systems, and Robert A. Perry provided a look at the future of Panasonic’s HDTV business.

Mitsukoshi told reporters gathered at AbleComm headquarters in Milford, CT, “I am extremely pleased that we have been able to convince the beloved Mark-san to come out of retirement and return to his desk. He worked at Panasonic for nearly 35 years and has an unmatched reputation and a special relationship with our dealers and distributors, and he will be a vital part of preparing the division for the future.”

“We have defined our future as the dominant seller of plasma televisions, even though other display types have taken away percentage points in some screen sizes. We know that plasma is still the magic word that excites most buyers, and recent decisions by Pioneer and Fujitsu to exit the plasma display panel business offer us the opportunity to gain market share.”

Mark Balsama then addressed the group and revealed plans to incorporate newly developed, miniature plasma displays in telephone products. “This is my first official day back at work, and I have a very exciting announcement to make. For nearly a decade, Panasonic’s engineers have been secretly working on a thin, lightweight low-voltage compact plasma display. We have recently reached a licensing agreement for some key technology with product developer AbleComm, Inc. — the same company that conceived our very successful KX-TVS50 voicemail system over 10 years ago. We will be able to incorporate miniature plasma displays into both consumer and business telephone products starting this fall. They will rival OLED displays for brightness, contrast and thinness, and can be manufactured for much less money.”

AbleComm president Michael N. Marcus said, “This is an unexpected and happy coincidence for all of us. Our company has had a long relationship with Panasonic. Several years ago we developed a family of high-efficiency headsets for use with Panasonic business phones, and it turned out that a proprietary component used in those headsets was exactly what Panasonic needed to complete the development of their low-voltage miniaturized plasma displays.”

Balsama continued, “Many of our new phones will have vibrant color plasma screens that can run on just 1.5 volts and won’t require any additional wiring or special power supplies. We’ll be able to put plasma in cell phones, business phones, consumer phones, corded phones, cordless phones, and even door intercom monitors and fax machines. We will revolutionize the consumer electronics business, as Panasonic has done many times before.”

Robert A. Perry, the new Senior Vice President of Panasonic Consumer Electronics Company who is responsible for marketing plasma and LCD HDTVs, also addressed the meeting. He said, “Our plasma expertise and our large- scale, efficient manufacturing will allow these new small Panasonic plasma screens to replace LCDs in many applications — gasoline pumps, automated teller machines, camera viewfinders, MP3 players, vending machines, automotive displays, digital photo frames, appliance touch screens and even the little pop-up screens on printers. In fact, I am pleased to announce that we will be supplying mini plasma screens to HP for an exclusive two-year period for use in their printers. We view our thin low-voltage PDP technology as a pre- emptive strike against OLED technology.”

He pointed out that despite Panasonic’s strong belief in the superiority of plasma displays, “We can’t afford to ignore the growing demand for LCD HDTVs. At the same time that we are OEM-ing plasma for Pioneer, we will be quickly adding many models of LCD TVs to our line, buying OEM LCD display panels from Sharp, our good neighbor in Osaka.”

“This strategy,” Perry concluded, “will position Panasonic as the world leader in television sales among first-tier brands, capitalize on the economy of scale and cost savings of both LCD and plasma technologies from our new business partners, minimize future production risks and stabilize long-term profitability in a chaotic market.”